The Eyesaur is a newly introduced antagonist that serves as the quinary antagonist in One Night at Flumpty's 2. He appears in CAM 1, CAM 3, and CAM 6.

If The Player completes Hard-Boiled Mode, a newspaper article will appear. It is then revealed on the newspaper article that "Allegedly, Flumpty has constructed a skinless, many headed monster out of the corpses of his game's unfortunate past contestants."

The Eyesaur just appears as a group of twenty eyes in a dark pit in the ground before he activates. Once he emerges, he reveals himself as a large, dark, red skinned dinosaur-like monster with twelve different heads, with eight heads having two eyes and four having only one. Only when appearing in the Hallway, the Eyesaur appears to have thirteen heads, seven heads having two eyes and six having one eye. This reverts back to twelve heads during his jumpscare.

He has a dinosaur like body, with a long torso, and four legs, with each having three claws each, a tail made out of multiple hands, and spines running the length of his back. He is completely made of the flesh, likely from all of the corpses he is made of. Eyesaur's full appearance is only viewable in CAM 6, just before he arrives in front of The Office, while every other view of the Eyesaur only shows the front half of his body.

The Eyesaur starts on CAM 1. He will not become active until 4 AM. Once active, he will then emerge from the dark pit in the ground, revealing what is under the pit. He will then travel through CAM 3 to CAM 6 on his way towards The Office.

The Eyesaur raises the Exposure Meter much faster compared to the other antagonists in the game. When he is in Hallway, the Eyesaur will have a one second window of time to jumpscare The Player.

In Hard Boiled Mode, the Eyesaur is much more active, like the others and can attack as early as 12 AM. He will immediately jumpscare The Player if the exposure meter is at 1/4 capacity or higher.

When performing his jumpscare, the Eyesaur will simply step into The Office and scream at The Player with his normally unnoticeable mouths. His eyes start leaking a black substance from them, and the irises in his eyes appear to have changed to red.

The Eyesaur would have reappeared once more as an antagonist in One Week at Flumpty's.

The Eyesaur would've differed slightly from the previous game, appearing to have one more head, each head having two eyes each, resulting in the Eyesaur having 22 eyes in total, two more from the previous game. His eyes would be bloodshot red instead of the pure white of the last game, his legs would also become less stiff. He also appears to be in a brighter shade of red with more noticeable mouths.

Eyesaur probably would've started on CAM 5, though he would have acted like any other character, trying to reach The Office in an attempt to kill The Player. His path can be blocked by turning the halls around and activating lasers, and he can be stunned momentarily by taking a picture of him, as the Night 4 could be a night supposted to be very hard (even there's a Night 6 it is the penultimate of the principal 5 nights) he could be very fast to make the things get challanger and balance the "picture" affecting thing since he gets stunned more time than the other characters due his 22 eyes.

He is one of the three characters who is of focus on Night 4, other being Champ & Chump.

The Eyesaur is a environmental mechanic in One Night at Flumpty's. As the name suggests, it is a pit in CAM 5 that contains, initially, 30 eyes.

It was confirmed by Jonochrome that the Eyesaur was never officially made a character until his second game, One Night at Flumpty's 2. Jonathan, as a response to fan speculation on the identity of the eyes, created Eyesaur for said game, since then making him a titled member of Flumpty's group. In the original game, the pit is only referred to as the "Eye Pit".

Eyesaur's body isn't seen in this game, however his appearance is possibly like in the second game

Unlike the others antagonists Eyesaur does not try to kill the player. Instead, he closes one of his eyes at 4 AM every time the player uses the Monitor to alert the player how many uses they still have before Grunkfuss the Clown kills them. when there's no eyes it means that Grunkfuss will jumpscare The Player once they flip the Monitor down

The pile of eyes seen in the first game in CAM 5.
Add a photo to this gallery

Eyesaur in CAM 3 with The Owl.

Eyesaur looking at the player.

The Eyesaur looking at the player from outside The Office.

Eyesaur in the "The Eggnd" screen.
Add a photo to this gallery 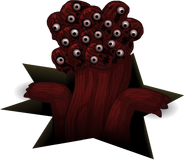 The hole in CAM 01 after Eyesaur has left

Eyesaur appearing at the doorway

Jumpscare
Add a photo to this gallery

Eyesaur in the second game's trailer.

Eyesaur in the trailer, but looking up.
Add a photo to this gallery
Retrieved from "https://one-night-at-flumptys.fandom.com/wiki/Eyesaur?oldid=39679"
Community content is available under CC-BY-SA unless otherwise noted.