Grunkfuss the Clown, also referred to as the Clown or just Grunkfuss, is the tertiary antagonist in One Night at Flumpty's.

Grunkfuss has pink skin, balding dark red hair, and a red nose. He has white eyes with small black pupils and six, child-like eyelashes on each eye. He has blue pants and white gloves, a red torso, and red shoes with yellowish-white soles. In his jumpscare, his eyelashes are now pointed and his pupils are now spiral-shaped, he has a spiked nose, and has two sets of rotten yellow, sharp teeth covered with slimy blood.

Grunkfuss the Clown will appear from a hole in the wall of the player's office at 4:30 AM as said in the commentary. He will become more and more visible whenever the player pulls up the monitor, and if both his legs are fully visible and his mouth is wide open, he will soon attack the player. The 30 eyes in CAM 5 can also alert the player to when Grunkfuss will attack, as each eye represents one of his phases, and when there are none left, he attacks. This will be 30 times. In Hard boiled mode, he becomes active at 2AM, there are no other changes in his behavior.

In his jumpscare he seems to fly towards the player, his mouth opening showing his bloody teeth to the player. His head turns 180 degrees when doing this. Only his hands and head is showing.

The sound Grunkfuss makes when killing the player.
WARNING! LOUD!

Grunkfuss the Clown returns as the tertiary antagonist in One Night at Flumpty's 2.

Grunkfuss appears mostly the same in ONaF 2, though his full body can be seen, unlike in the first game. His second row of teeth are also more visible.

Grunkfuss starts in CAM 2, crouched and facing away from the camera. When the hole comes out of The Constitution on the left side of The Office at around 2 AM, Grunkfuss will look into the viewpoint on CAM 2 and a patience meter starting at 2000 will show in the top-right corner of that specific camera. Every 30th tick is one second (-30 patience per second [It takes roughly 66 seconds, just over a minute for it to go down on a normal night, with it being roughly 26 seconds on hard boiled). When the patience meter reaches zero, he will burst out of the hole in The Constitution which appeared when the patience meter activated. At this point, unless The Player turns off the Light Switch in The Office, he will raise the Exposure Meter notably quicker than any other antagonist, excluding Eyesaur, and jumpscare The Player if the Exposure Meter completely fills, like every other one of Flumpty Bumpty's friends. (Excluding The Redman, The Owl and Golden Flumpty)

On Hard Boiled Mode, the Patience Meter starts at 800, and will always restart there. The speed of him filling the Exposure Meter is faster like everyone else with the exception of Eyesaur.

Grunkfuss arrives from the left of the screen, very close to your face to attack you, albeit his eyes gone, as he couldn't see you. Both his rows of teeth are visible, as well as the slimy blood on his teeth visible. He seems to attempt to bite the player right where the frontal lobe is.

The audio that play when Grunkfuss kills the player.
WARNING! LOUD!

Grunkfuss the Clown would've returned in One Week at Flumpty's, presumably again as the tertiary antagonist.

Grunkfuss would've been very different in appearance here in OWaF, as his teeth seems very sharp yet rotten, his eyes now are yellow and he seems more realistic, at least when compared to his cartoonish compatriots. He seems to be somewhat more bulkier than his earlier versions, and his outfit is rather reminiscent of a strawberry. His hands and legs remain the same though.

Grunkfuss possibly would've started on CAM 6, and he probably would've travelled through the CAM 5 and CAM 10, however is unknown how the player would've avoided him and his pattern

He and The Redman would've been the characters of focus on Night 3.

It's possible that like the previous games he will teleport.

Grunkfuss jumpscaring the player. (his feet are seen out and his mouth is wide)

Grunkfuss leaves the scene, allowing Golden Flumpty to attack the player instead.

Grunkfuss the Clown as shown in the credits.

One Night at Flumpty's Textures 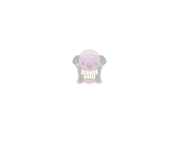 Grunkfuss in the second game's trailer.

Grunkfuss, but looking at the camera instead.

Grunkfuss the Clown's jumpscare without the background.

Grunkfuss texture of looking at the cam in Grunkfuss Room 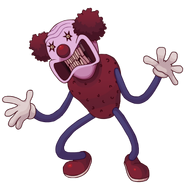 Grunkfuss the Clown in One Week at Flumpty's
Community content is available under CC-BY-SA unless otherwise noted.