The Office is the main location in One Night at Flumpty's, where the player resides for the game. It connects to CAM 2A and CAM 2B. All characters aim to reach the Office to kill the player, and the player have limited door power to close the doors with to survive.

The office is in bad shape, showing very noticeable damage, such as ripped pieces of wallpaper and rotten food on the floor. It's incredibly dirty and not well-kept. There is a wide table holding various props, such as a blue potted cactus, a severed Winnie the Pooh with its entrails dangling out, the head of Dr. Mario, a deformed Donkey Kong doll, a log, a large key, a bottle of blue Gatorade, the blue-striped red-starred yellow Pixar ball, a brassiere and underwear, a dog, a sock, a pink elephant, and feces.

On the wall are four posters: One depicting the characters from Donkey Kong, one of Ronald McDonald, one showing a white poodle with the word 'DOG' watermarked on top of it, and a map of the state of Utah. The wallpaper is a dirty brown and has a pattern resembling the heads of a Metroid from the game Metroid.

On the floor is garbage and detritus: six pistol-shell casings, a children's ring-tower toy, vomit, a Santa hat, two bananas, a human brain, a toaster, and a moldy sandwich.

The Office is where The Player is located in One Night at Flumpty's 2. It is where the antagonists try to work their way into in order to find and kill the player. The player will be stationed here for the whole night and cannot move from this location.

Similar to the first game, it's filthy and rundown. The office is a room with random objects in it, such as Freddy Fazbear's head mounted on the wall, Piglet's dissected body, a founding father, the Record Player from the trailer, Purple veins all around, kid's building blocks spelling out "DIE", a thrown tomato, a child's drawing of a house, a turkey or chicken, a cheetah's head mounted to the wall, the U.S. Constitution, a green whale, a hamburger, a revolver, a backpack, a spilled slushie, sneakers, some sort of plant, a soda bottle, a potato, a lot of gum stuck to the wall,a wrench, a broken light bulb, another (presumed empty) soda container, what appears to be the Redman in the bottom left corner, and the light bulbs seem to sprout from the ceiling. There also appears to be cracks on the left side of the wall.

There is a hallway in front of the player, where Flumpty, Birthday Boy Blam, and Eyesaur appear. The Owl will try to get in through the vents on the top of the room, from which one can be closed at a time. At 2 AM (12 AM in hard-boiled mode), The Constitution appears with a black hole, where Grunkfuss the Clown bursts out of if his Patience reaches 0.

The Office is once again the main location where the player resides in One Week at Flumpty's, prior to its cancellation.

The office was never finished. However the current version, as shown above, is very colorful, and is much more clean than the previous two offices (most likely because this office was never finished, making it not having much stuff in it). There are three entrances and no doors, as well as three red electrical panels used to power the lasers. There is a portrait of Flumpty, an eerie, wooden doll of a young girl, a stuffed animal of a chicken, a paper heart, and sketches of a giraffe and a pot.

There is also a bulletin board, detailing which characters appear on which nights;

The Redman at the left door. 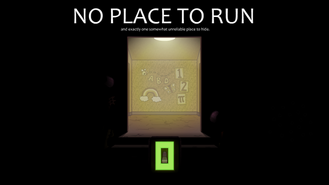 The Office in the third teaser for One Night at Flumpty's 2. 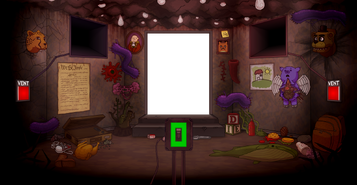 The updated office with the lights on.

The updated office with the lights off. 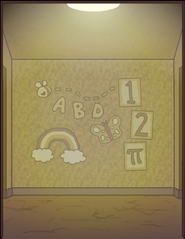 The hallway in front of the office.

Texture of the pig looking at the player.

Birthday Boy Blam looking at the player from outside of the Office with the light off.

Grunkfuss The Clown and Flumpty looking at the player from outside the old office with the lights off.

Grunkfuss The Clown and Birthday Boy Blam looking at the player from outside of the Office with the lights off.

Eyesaur looking at the player from outside of the old Office with the lights off.

The old office, but with Piglet smiling.

The old office room in its full texture view.
Community content is available under CC-BY-SA unless otherwise noted.